FTLF’s Gene Fidell, along with co-counsel Mark Zaid and Andrew Bakaj, appear here with client Colonel Eugene (Yev) Vindman, who was promoted in June to full Colonel in the Army Judge Advocate General’s Corps.  He and his twin brother Alex were illegally retaliated against by the Trump Administration for objecting to former President Trump’s improper effort to exert pressure on the President of Ukraine. 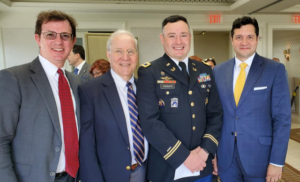 With Gene and Colonel Eugene Vindman in this photo are co-counsel Mark Zaid, at left, and Andrew Bakaj, at right.

Gene is of counsel at FTLF.  His practice areas include federal administrative law and appeals and military justice.  He is also an Adjunct Professor at NYU Law School and Senior Research Scholar at Yale Law School, president emeritus of the National Institute of Military Justice, and editor of the leading international military justice blog, Global Military Justice Reform.